The constantly increasing number of smartphones in the modern society has seen the field incorporate a rapid growth in related smartphone application counts. This has created an escalating scenario where the safety of both private and sensitive information is trusted to not so well known applications. The mobile device code security stack can generally be broken up into four unique platforms. The lowest layer of the stack is the infrastructure layer, followed upward by the hardware, operating system and application layers. These security stack layers each define a separate section of the security model of a smartphone or mobile device. 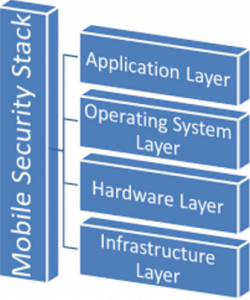 Each layer of the mobile code security model is basically responsible for the security of all its contents. Normally, the upper surface of the app’s stack depends on the inner layers to ensure that their contents are well secured. The arrangement allows device’s security mechanism to narrow down its focus on an area of concern without necessarily expending its resources in the analysis of a given breach attempt.

The infrastructure layer is the lowest and thus most supportive layer of the mobile code security stack. This layer is the foundation that supports all of the other tiers of the model. The majority of the functional components at this layer are owned and operated by a mobile carrier or infrastructure provider; however, integration into the handset occurs as data is transmitted from this tier upward.

Many mobile device voice and data carriers regulates the whole security system that carries all data and voice communications from a given start point to a designated end point. The security of components at this level basically depends the protocols in use by both the carriers and how advanced the platform is. A good example of such protocols is the eminent code division multiple access protocol (CDMA), the global system for mobile communications (GSM), GLONASS, The global positions systems (GPS), short messaging systems (SMS) and multimedia messaging systems (MMS).

How to Test for the Mobile Code Security

When troubleshooting a mobile device for security implications, it’s prudent to take into account each and every layer of the mobile code security stack in order to determine how effective the security mechanisms that are in place are. When scrutinizing every layer, determine what would happen if one or more security apparatus put in place by the developer are breached. If one or more of the mechanisms are not sufficient then code security stack is not safe for the task.